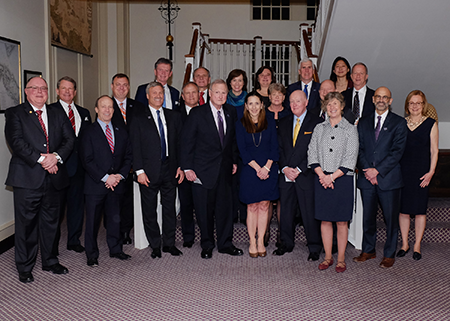 CHARLOTTESVILLE, January 29, 2020. On Thursday, January 23, the Virginia Law Foundation welcomed 23 new Fellows at our Annual Dinner and Fellows Induction Celebration in Colonial Williamsburg. The Class of 2020 was met with open arms as the Virginia Law Foundation recognized our newest Fellows. This annual event, held in conjunction with the Virginia State Bar’s annual meeting, is a time for reflection and rejoicing as we appreciate the past year’s accomplishments and anticipate the bright future of 2020.

Virginia Law Foundation President Matthew E. Cheek began the evening’s festivities with a few opening remarks. He spoke about the state of the Foundation and thanked everyone for their hard work, including his predecessor, F. Anderson “Andy” Morse, and Executive Director Raymond M. White. Mr. Cheek then passed the torch to Jon D. Huddleston, President-Elect of the Virginia Law Foundation, who delivered an invocation before guests enjoyed their dinner.

Mr. White and Past President Stephen D. Busch then awarded the Executive Director’s Award to Anne Marie Whittemore, Esquire. This award honors a Virginia attorney who has made significant contributions to achieving the Virginia Law Foundation’s mission to promote the Rule of Law, access to justice, and law-related education. 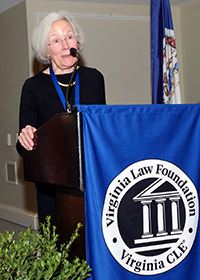 A member of the Fellows Class of 1989 and President of the Virginia Law Foundation in 1991-1992, Whittemore has been nothing short of a tour de force in Virginia’s legal community. The first female lawyer at McGuireWoods LLP in 1971, Whittemore also rose to become the firm’s first female partner, representing countless companies during her 47-year career. She also led the Commission on Virginia Courts in the 21st Century, served as President of the Richmond Bar Association and as Chair of the Board of Directors of the Federal Reserve Bank of Richmond, and is a Fellow of the American College of Trial Lawyers. Whittemore served on the Board of Directors of Owens & Minor, Inc. and T. Rowe Price Group, Inc., and was a Trustee for Hampden-Sydney College. She currently serves on the Advisory Board of Massey Cancer Center and on the Board of Directors of the Virginia Institute of Marine Sciences Foundation. Her many, many contributions to the legal profession, as well as her tireless dedication to community service, illustrate why Whittemore is the consummate citizen lawyer and well deserving of the Executive Director’s Award.

The induction of the 2020 Class of Fellows was announced by Mr. Cheek and Edward L. Weiner, Chair of the Fellows Committee. Fellows are recognized as leaders in the profession, not just in their practices but in their communities. The 23 new Fellows join a group of more than 500 of Virginia’s best and brightest legal practitioners, committed to the highest ideals of the law and to the concept of citizen lawyer. 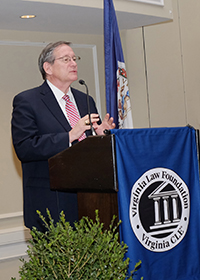 The Honorable Donald W. Lemons of the Virginia Supreme Court delivered the Annual Dinner’s keynote address. Chief Justice Lemons discussed the Supreme Court of Virginia’s new Judicial Learning Center, which was supported by a 2018 Virginia Law Foundation grant of $75,000. The Judicial Learning Center was also highlighted in a video, which can be viewed on our website. Chief Justice Lemons discussed the Center’s important goal of promoting public understanding of the Rule of Law and the history of the Virginia judicial system. His moving remarks expressed appreciation for all who helped make the Judicial Learning Center a reality and left the audience with an encouraging message about gratitude and upholding the Rule of Law.